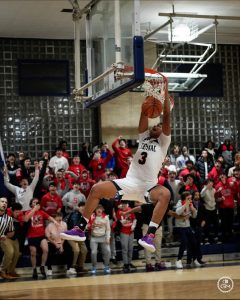 Written by: Jaquam Bodden
The start of High School hoops season has started on a high note so far and we love to see it. Some teams have came out strong while others have faced a huge wake up call.
Iona Prep’s Huge Start
The Gaels of Iona Prep are off to a very strong start at 4-0 overall (3-0 league play). On Saturday, December 3rd, they came into St. Rays and shocked everyone by getting a 75-67 win. They followed it up with a blowout win in their home opener against Holy Cross and yesterday they continued their hot start by beating Scanlan 66-60. The play of their core players Blaise New, AJ Rodriguez, Johnny Keenan, and Bangaly Berete have the Gaels as the most improved team early on.
Friday Night Lights
The action around the CHSAA this past Friday was nothing short of spectacular. I was live at Mount St. Michael vs St. Francis prep where the Terriers handled the Mountaineers 59-41 behind the play of their underclassmen Nigel Moore and Vere Anthony who scored 15 points a piece. Jayport Smith led Mount with 13.
In some Brooklyn / Queens action, Molloy and Christ The King took care of business getting road wins against Xaverian and Bishop Loughlin respectively. Molloy won on a game-winning shot by Freshman Josh Powell.
Dwayne Pierce led 4 players in double figures with 14 points in the 63-55 win against a tough Loughlin team. Playing in front of the Loughlin Crowd was a great way for CTK to prepare for Sierra Canyon on Monday.
Stepinac took down Baltimore powerhouse St. Frances 72-67 in Overtime.
Braylan Ritvo led Stepinac with 20 points, 6 boards, and 5 assists. The backcourt duo of Boogie Fland and Danny Carbuccia combined for 34 points and 17 assists in the win as well.
St. Peters Edge Stepinac
The Eagles of St. Peter’s in Staten Island gave Cardinal Hayes the fits before Hayes dominated in the second half on December 4th, but they got the biggest win of the Season after beating Stepinac 66-63 at the NY Hoops Festival Sunday night. Sophomore Quadir Martin a 6-6 forward who transferred to St. Peters from Curtis had a monster double-double with 27 points and 12 rebounds.
St. Peters look like a much stronger team this year with the additions of Martin, Jalen Munson as well as the players who moved up to Varsity. Can’t forget about guard Mike Spisto. The Eagles are a team to keep an eye on as the season progresses.
Roadkill?
It seems that early on the Road team has been the strongest to start this season. It says I because it’s definitely the opposite this time around. Those who take care of business on the road will be successful during the playoffs in March.
Hayes Out West
Cardinal Hayes went through a tough Stretch at HoopHall West going 0-2 with losses to Duncanville (TX) and Perry (AZ). Despite the losses Junior Ian Jackson was among one of the standouts. Going forward, there will be more chances for Hayes to get signature wins on the national stage. There’s no denying that the past weekend are lessons they can build from.
Prolific Player of the Week: AJ Rodriguez
The Performances of AJ Rodriguez have been huge in the 4-0 start for the Iona Prep Gaels. Rodriguez is currently averaging 21 points and 5.5 rebounds per game on the season. In two victories last week Rodriguez averaged 23 points and seven rebounds. Against Holy Cross, Rodriguez scored a career-high 28 points to go with 7 rebounds. Rodriguez followed it up with a 19-point performance against Scanlan.
previous post
The Prolific Report: Don’t Sleep in December
next post
NYCHSFL Week 7 Power Rankings