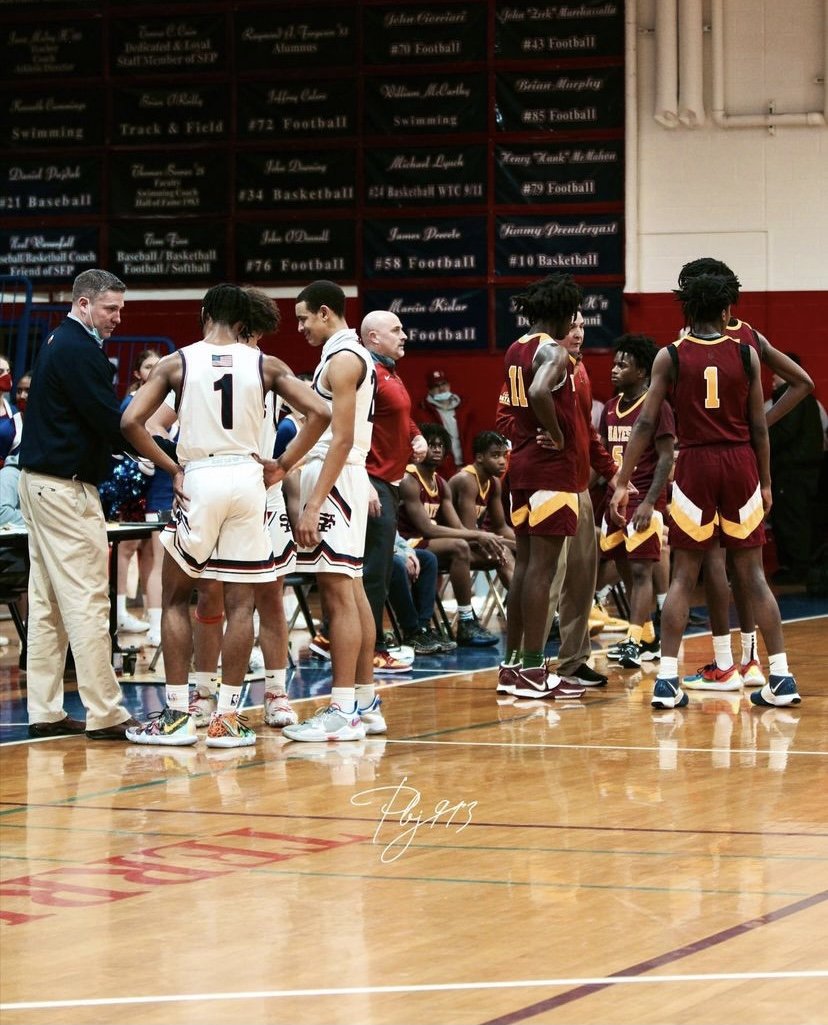 St. Francis prep was one of many great games Yesterday that lived up to the expectations. A Sunday afternoon showdown between two first-place teams in their respective divisions within the CHSAA.
The game started with Hayes sophomore guard Ian Jackson throwing down a two-handed slam straight from the tip-off followed by a jumper by senior Tarique Foster. as Hayes raced out to a 4-0 lead. Latiek Briscoe went baseline for the shot to get the terriers on the board. Off a forced turnover Vere Anthony found Jaden Daughtry for the wide-open slam. Tobe Awaka answered back with a facial slam over a defender to tie the game at six. The terriers went on the run to take an 11-8 lead but Hayes would answer back with a 6-0 run to take a 14-11 lead going into the second quarter.
SFP would start the second period outscoring Hayes 7-2 to take an 18-16 lead with 4:57 remaining in the quarter. SFP would outscore Hayes 12-8 to take a 30-24 lead into the half.
In the third quarter, SFP would take their largest lead of the game up 40-31. The terriers started to get contributions from just about everyone. Hayes would come back to close in on the terriers but going into the fourth SFP was still up 44-41.
The fourth quarter was big as Hayes retook the lead at 45-44 lead but SFP would then go on a run to take a 52-47 lead. Hayes senior guard/wing Tarique Foster answered back with a huge three-ball to cut the deficit down to two.
The Terriers closed the door on a Hayes Comeback bid with some key defensive plays and a bucket by Tyler Michel with under a minute left which sealed the game. SFP went on to win 61-56 thanks to a balanced attack led by Pascarelli’s 18 points the 6-3 Junior also had a key steal in the game which was pivotal late.
Late game execution and defense were the major keys to this win for SFP as Terriers head coach Jimmy Lynch sent a message to his squad stressing how big of an opportunity this game was to prove themselves. “We had to preach to our guys this is an opportunity for us I think a lot of people try to overlook us sometimes and that’s what we try to say so since they are on our home floor why not try to go toe to toe with them”.
Hayes was led by Senior Tarique Foster’s 15 points. Tobe Awaka Scored 12 points while Ian Jackson and DJ victory scored 10.
There were many times when the game could have gone in Hayes favor, but in the end, the Terriers understood the Assignment and defended home court against the Nationally ranked Hayes squad. Many CHSAA playoff matchup scenarios were thought about throughout the season but there’s no question that this is one to consider.
There’s plenty more basketball left for the Terriers who made a statement last night and remain undefeated in CHSAA league play. The terriers pay a visit to another CHSAA title contender Stepinac on February 15th but before that the Terriers gotta head over to CTK to play a Royals squad who is seeking revenge after losing to the Terriers 67-51. Real ones within the NYC basketball community know that the terriers are for real. This game may be looked at as an upset because of the ranking but it was only proof that the Terriers were for real from the jump.
-Jaquam Bodden
previous post
Stepinac Crusaders remain Dominant with major tests ahead.
next post
Silent But Deadly: The Real Cost of Bone Bruises in Football