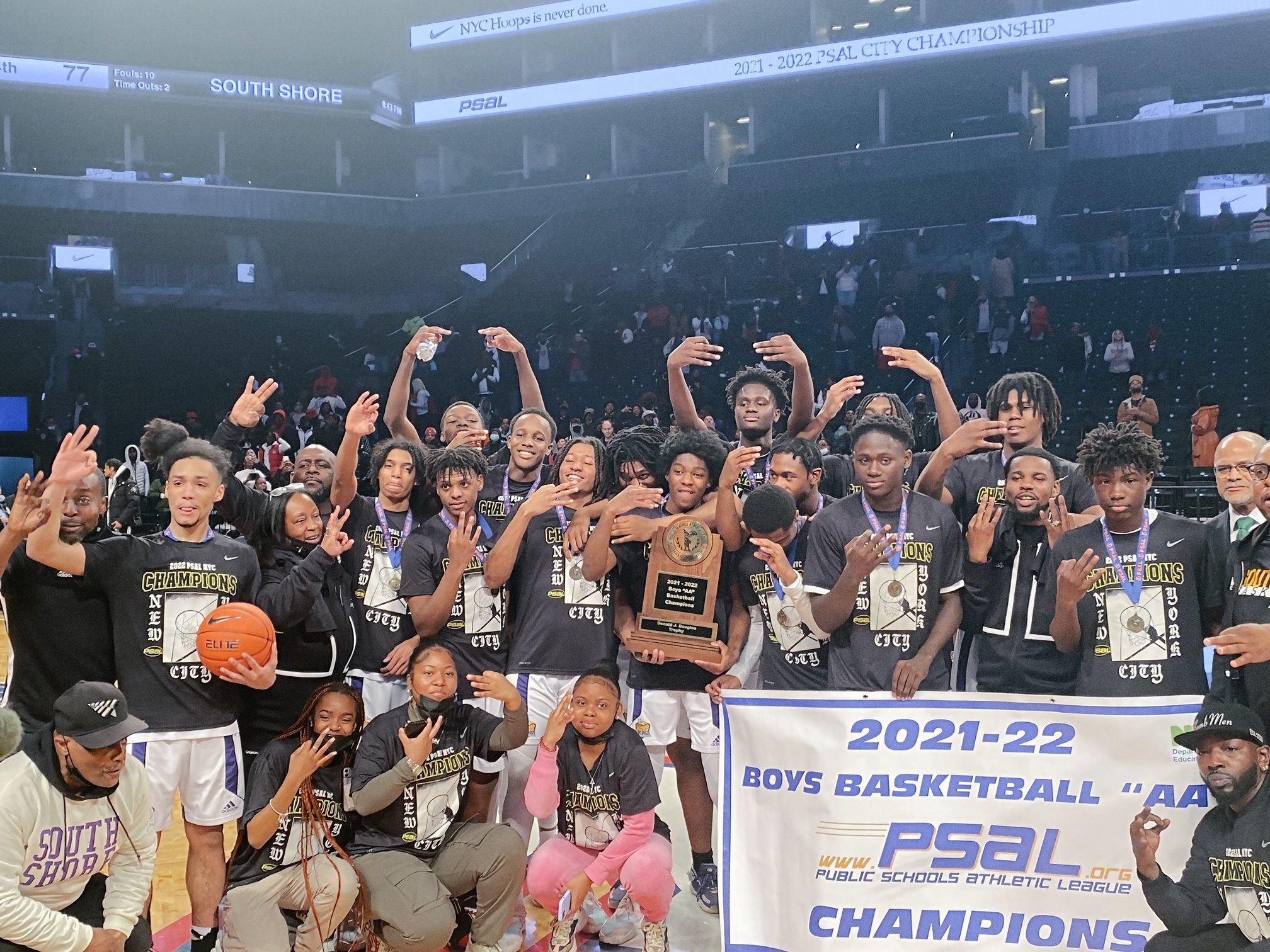 With the State federation canceled this year due to COVID-19, and the CHSAA season over, The PSAL championships remained as some of the last High School basketball games of the season.

Thursday’s PSAL AA championship between South Shore and Eagle Academy Brooklyn at Barclays center was a rematch of the epic Brooklyn Borough championship. Max Ragusa and the Vikings had revenge on their minds as they raced out to a huge 19-2 lead in the first quarter. Eagle BK went on a run the deficit down to single digits in the second quarter but Shore closed it out going up 35-19 at the half.

In the second half, the Vikings had an answer for every big run that Eagle Brooklyn had thanks to the strong performance by senior point guard Max Ragusa, the Vikings went on to win 77-52.

Heavily Heckled throughout the game, Ragusa remained unfazed by the outside noise as he finished with 26 points earning MVP honors. Just like in the semifinals game against Wings Academy, Ragusa scored a majority of his points in the second half

St. John’s head coach Mike Anderson was in attendance recruiting the city title game along with coaches from Fordham University. Brooklyn Nets forward Nicolas Clayton along with Deauzya Richards and Betinjah Laney of the New York Liberty was in attendance for the PSAL championship.

PSAL A & B City Championships

For the past several years, the PSAL B division championship has been represented and won by teams from the Bronx and Brooklyn, but this Past Sunday things were different as The Scholars Academy out of Queens and Community Health of the Heights out of Manhattan both made their first appearance in the championship game.

The A division championship game between Murry Bergtraum and Transit Tech is a dream matchup that had many hoop junkies within the NYC area buzzing.

Both teams came into this game with undefeated regular-season records. Both of them have some unheralded talent who are poised to make an impact on the next level. In our opinion If there were power rankings of teams across the PSAL and CHSAA with all divisions included there’s no question these two teams will be in the mix.

The game started in Favor of Bergtraum as they raced out to a 13-5 in the first quarter. Fueled by David Harrington’s back-to-back three-pointers Transit Tech would go on a 10-7 run to close in on the Blazers but they will still trail 20-15 at the end of 1.

The Blazers would have a big second quarter to build a 43-31 lead at the second half. The lead would grow to as much as 18 for Bergtraum but the Express went on a huge run in the fourth to cut the lead down to 1 with 12 seconds remaining.

Cristian Davis hit a key free throw to give the Blazers a 61-59 lead. It was some cushioning for the blazers but there was enough time for the Express to get a shot.

The express found a way to get the ball quickly to Ashton Reynolds for a game-tying layup but he couldn’t convert as the Blazers escaped with a 61-59 win.

Bergtraum a school known for their girls’ varsity team dominating the City in basketball by winning 15 consecutive city titles, now has a champion on the boy’s side.

In this edition of the Prolific Report, let’s give some flowers out to some other teams who made history during Championship Week.

The Knights defeated Albany power Green Tech 55-45 to capture the Class AA NYSPHSAA “AA” state title. They finish the season with a 24-0 record.

The South Shore Lady Vikings dynasty continued their dominance last Thursday as they defeated Susan Wagner 74-50. This is the sixth title in the school’s history. The Lady Vikings were led by MVP Natalia Williams who scored 13 points and grabbed eight rebounds. The championship was their 21st straight win as they remain undefeated with an upcoming meeting against LuHi in an unofficial state tournament game coming up on March 26th.

PROLIFIC PLAYERS OF THE WEEK

Bowles the 6-3 Junior guard scored 20 points in the Class A city championship game on Sunday. Bowles is a name that more people should hear about very soon.

Max Ragusa gets another player of the week nod for his 26 points and five-assist performance in the “AA” city championship game. The performance was perfect timing as the unsigned senior performed well in front of the coaches in attendance.