Back to top
Skip to content
© 2022 Prolific Sports Lab. Designed by AGENZ.
All Rights Reserved.
Back
Uncategorized 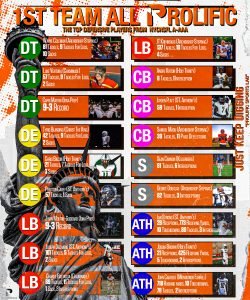 This past season was special for the New York Catholic High School football league. There was amazing talent all over the league. Defense was especially strong with ballers at all positions. Checkout the list below for this year’s All Prolific First Team Defense selections.

Wayne Coleman (Archbishop Stepinac) – At 6 foot 2, weighing 300 pounds, Coleman has freakish athleticism. He dominated for a second straight season on the Stepinac defensive line. He had over 80 tackles and 10 sacks during his senior year. He recently picked up an offer from UCONN.

Luke Ventura (Chaminade) – Ventura had offensive coordinators worried every time he was out there. At 6’5 285, he was a monster for this Flyers defense. He ate double teams and even fought through them to come up with key tackles for Chaminade.

Capri Martin (Iona Prep) – The Villanova commit was a run stuffer all season long for the Gaels. His ability to eat blocks and stuff the middle of the field worked in excellent tandem with star linebacker Zyian Moultrie-Goddard leading to a strong front 7 for Iona Prep.

Tyriq Blanding (Christ The king)- The Penn State commit was very disruptive on defense. His speed and power allowed him to play inside and outside for the Royals.. He had a quick get off and came away with 42 tackles on the season.

Chris Bacon (Holy Trinity)- The edge rusher was the defensive player of the game in the AA-1 title game. His size and elusiveness was scary for offensive lineman. Bacon had an impact every single week and will be playing football at Maine next fall.

Preston Carey (St. Anthony’s)- The star freshman came in and made his presence felt immediately throughout the Catholic League. An absolute run stopper with scary athleticism and a high motor Carey is already one of the best defensive lineman in the league as a FRESHMAN. The sky is the limit for the big defensive lineman out of St. Anthony’s.

Zyian Moltrie-Goddard (Iona Prep)- The hard hitting senior linebacker did his thing once again this fall. He was an elite run stopper all year. He helped anchor this Iona Prep defense for the last three seasons and he’ll be playing for Syracuse next year

Joseph Dechario (St Anthony’s)- The middle linebacker was huge for St Anthony’s this season. The friars run defense was lacking at the start of the year, but Dechario helped turn it around. The captain registered 101 tackles on the season.

Charlie Battaglia (Chaminade)- He was the heart and soul of this Flyers team. Battaglia was one of the best run stoppers in New York and made clutch plays, including 2 interceptions vs Holy Trinity. He collected 89 tackles and recently picked up an offer from Bryant

JT Krivinskas (Archbishop Stepinac)- Krivinskas was one of the most productive players in New York. He led this Stepinac run defense with 137 tackles on the year. He was all over the field for the Crusaders

Jayden Platt (St Anthony’s) – He had to go against the number 1 wide receiver every single week in a heavy passing league and Platt stepped up. He was a technically sound corner  in man coverage limiting opposing stars during his big senior season.

Andre Kirton (Holy Trinity) – Kirton did a lot for the Titans on offense, but on defense he showed his ability to lock up wide receivers. His speed and footwork helped him dominate matchups and come away with plenty of tackles

Sean Cannon (Kellenberg)- The Firebirds do it all guy was an amazing playmaker on defense. He recorded 81 tackles with 6 interceptions. When Kellenberg needed a big play it was usually Cannon delivering it. He had a big impact on offense as well.

Deonte Douglas (Archbishop Stepinac)- It was a breakout season for the talented junior. Douglas was one of the hardest hitters in the catholic league last season. His speed helped him cover plenty of ground as he had 81 tackles and 3 interceptions.

Ian Strong (St Anthony’s)- The Rutgers commit was a superstar this past fall. At receiver he had 28 receptions for 773 yards and 10 touchdowns. He also registered over 80 tackles on defense doing it at either defensive back or at linebacker. Strong was a human highlight reel during his senior year.

Josiah Brown (Holy Trinity)- Brown is the 83rd ranked player in America by ESPN and he showed why he’s one of the most exciting players to watch. He’s one of the fastest players in the nation and was a threat as a receiver, safety and punt returner. He holds 20+ offers from the top schools in the country.

John Caufield (Monsignor Farrell)- When Farrell lost their star running back Messiah Burch, Caulfield stepped up and delivered over 700 yards on the ground and 10 touchdowns. He really stood out on defense with a ton of hard hits and constantly making plays in pass coverage.