Back to top
Skip to content
© 2022 Prolific Sports Lab. Designed by AGENZ.
All Rights Reserved.
Back
All-Prolific Team 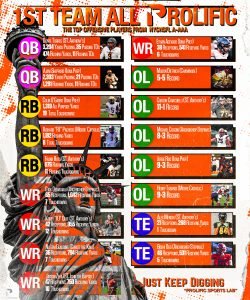 This past season was special for the New York Catholic High School football league. There was amazing talent all over the league and we were treated to a show this past fall. Take a look at our All Prolific selections from this past season.

Dante Torres (St Anthony’s)- The New York state player of the year was phenomenal for the Friars. He threw for 3,204 yards and 35 touchdowns. He also added 474 yards on the ground and 11 scores. He played amazing on the big stage and helped the Friars win their first state championship.

Ajani Sheppard (Iona Prep)- For a second consecutive season, Sheppard threw for over 2,000 yards and rushed for over 1,000 yards. At 6’2 230 pounds, along with his true dual threat ability, he took over games. The Rutgers commit was dominant all year and helped Iona reach the AAA final.

Colin O’Garro (Iona Prep)- O’Garro created a special combination with Ajani Sheppard in the ground game. He led the AAA division in rushing with 1,319 yards and accounted for a total of 19 touchdowns. He drew plenty of attention from colleges and will play football at Dartmouth next fall.

Richard “RJ” Pacheco (Moore Catholic)- The super sophomore had a breakout year for the Mavericks. Pachecko pulled off a ton of big runs which resulted in over 1,000 yards on the ground. He currently has offers from Buffalo and Temple.

Frank Ruta (St Anthony’s)- The power back for St Anthony’s had a huge senior season. He had the best game of his career in the catholic league state title. He took over the game in the 2nd half and rushed for 132 yards and 2 touchdowns. He finished the year with 1008 yards and 13 touchdowns on the ground.

Gjok Dedvuakaj (Archbishop Stepinac)- The senior receiver comfortably led the NYCHSFL in receptions with 65 on the year. He added 1,042 yards and 7 touchdowns to go with it. He was consistently able to get open and pull off big plays for an explosive Stepinac offense.

Korey “KJ” Duff  (St Anthony’s)- It was domination all year for the 6 ‘5 junior wide out. Despite missing a few games, Duff finished with 955 yards and 12 touchdowns. He was a matchup nightmare and had four touchdowns in the AAA championship game against Iona Prep. He will continue to gain attention from power five schools.

Na’eem Gladding (Christ the King)- The junior playmaker made a name for himself this past fall. Gladding caught 36 passes for 794 yards and 7 touchdowns. He showed he was one of the top deep threats in New York City this past year. He holds several power five offers.

Jayson Zeva (St John the Baptist)- Zeva was the top receiver in the AA-1 division after leading the division with 750 yards. He was one of the best route runners in the league this past season and was a nightmare for opposing defenses. He’ll be playing football at SUNY Cortland next fall.

Ethan Acevado (Iona Prep)- The speedy receiver was a game breaker. At any given moment he could take the ball to the house. The elusive senior had 541 yards and 6 touchdowns on the season. He had timely catches and made big plays for this Gales offense.

Mason Dietrich (Chaminade)- The senior captain led the Flyers offensive line all year from the center position. He was one of the most consistent players in the state. He did an amazing job controlling the line of scrimmage against some of the top defensive lineman in New York. He’ll be playing football at Fordham next season.

Carson Ciancuielli (St Anthony’s)- He was the anchor of the Friars offensive line all year. He was key in protecting Dante Torres allowing him to have time in the pocket. Ciancuielli was one of the big reasons why the Friars ground game evolved throughout the season.

Michael Cogoni (Archbishop Stepinac)- The Coastal Carolina commit was dominant all year. He was one of the most athletic lineman in the league this past season. Cogoni was one of the top pass protectors in New York.

Jorge Ruiz (Iona Prep)- Ruiz was a mauler of an offensive lineman. At 6’4 285 pounds, the big man threw people around up front. He paved holes that allowed Ajani Sheppard and Colin O’Garro to run wild all year.

Henry Tabansi (Moore Catholic)- This Mavericks offensive line improved drastically from 2021  to 2022 and a big reason why had to be the play of Henry Tabansi. He was a machine at left tackle. He had a combination of quickness and power that allowed him to have a successful season. He’ll be playing football at the University at Buffalo.

Bodhi Ogg (Stepinac)-  One of the premier weapons on a strong Stepinac offense Ogg was a constant option for QB Will Currid. He finished the season with 46 receptions for 531 yards and 5 scores leading all TEs in AAA.

Alex Menghi (St. Anthonys)- A dynamic two way player Menghi helped the Friars on both sides of the ball playing both Tight End and Defensive End. While the Friars were stacked with offensive weapons Menghi provided a strong option to attack both the middle and flats of the field.